One of the best aspects of the keychain spy camera is that it can be easily concealed anywhere. You can hook it on your chain for your keys for your car, your necklace, you can even hang it off the side of your purse.

Because it’s an innocent-looking piece of equipment, no one will think twice about it hanging around your neck. They just won’t also realize that you’re actually recording everything going on at that moment.

Another aspect to consider for your keychain spy camera is whether or not it’s functional. Are you able to unlock and lock your car with it? If not, then those who you have it around may become suspicious when you’re not using the keychain fob to perform those actions with.

They might start to wonder what the purpose of the keychain is. To avoid those awkward questions, it’s a good idea to have a keychain spy camera that also functions as an actual locking mechanism for your car.

One of the problems that you frequently run into with micro cameras is the space on their SD cards. They’re not able to hold as much footage as larger cameras. This can sometimes be aided by linking the micro camera to a PC, but it’s still nice if the camera itself has a decently sized SD card.

That’s why when you’re looking for a keychain spy camera, the size of the SD card is extremely important. You’ll want something that supports at least 32GB of memory. Depending on how often you use your camera, that amount can be eaten up quickly.

If you don’t mind the possibility of losing files, you could always choose a camera that offers to loop. This is a function that basically rewrites over old files with the new files if you run out of space.

Otherwise, you’ll want to make sure that the camera carries as large of an SD card as possible.

Keychains aren’t always the easiest to position when you need to record something. That’s why their visual and audio quality is so important. Whatever you do end up recording needs to be of the highest quality.

Keychain spy cameras are particularly useful for voice recording. Since you can’t always be sure if the keychain is pointing in the direction if it’s around your neck, for example, you can rely on it to capture incredible voice recordings.

However, even spy cameras can give low-quality recordings. In this instance, to make sure you’re receiving the best possible footage and recordings that you can, the keychain spy camera should offer HD quality and crystal clear audio.

If you’re someone who wants to set the keychain down on a table at home and only record when something is actually happening, then you’ll want a camera that has motion detection enabled.

This is a setting that allows the camera to start recording only when it senses movement. To prevent the SD card from filling up with footage that is meaningless, the motion detector feature can be a great benefit. It can also save you from going over numerous files that only show an empty room.

Motion sensing can also function as an alert system. If something is moving that shouldn’t be, you’ll know. 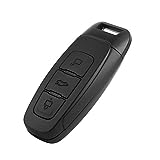 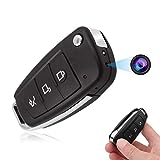 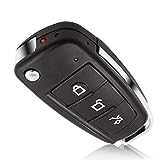 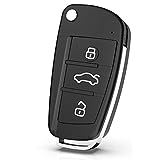