For those who need to secretly record a conversation, a recording pen can be the perfect instrument to use. Before you buy one, here’s everything you need to know about it.

Table of Contents show
What is a Spy Pen?
What Are Some Features?
Memory
Pocket-Sized
Best Spy Pens

What is a Spy Pen?

As its name might suggest, a spy pen is a camera that looks like a normal writing pen. Sometimes the pen is also functional, so those who are being recorded don’t become suspicious of a random pen laying on your desk. It also gives you the excuse to use the pen in order to angle it the way that you need it.

Spy pens offer both visual and audio recording capabilities. Depending on the pen, some might only offer video or audio instead of both. The operation of the pen is easy. Most models simply require you to press a button on the pen in order for the camera to start recording.

This can make recording a session extremely easy and subtle, so your target isn’t alerted.

What Are Some Features?

If you’re thinking about buying a spy pen, then you should consider its features. First, you should determine what you need the pen primarily for. Do you need video, audio, or both video and audio recorded? You can often find more affordable spy pens that only offer either video or audio capabilities.

However, if you prefer full recordings of your sessions, then it might be worth it to invest in a high-quality spy pen that captures both audio and video.

Some spy pens even allow you to take photos with a simple click of the button. Before purchasing one, ensure that it functions in the way that you need it to.

Another feature to consider is its quality. Both visual and audio quality is extremely important for later playback. If you’re attempting to capture something for a court case, you likely won’t move the jury if they can’t even see or hear what is going on in the recording.

For professionals, your clients won’t be overly impressed with grainy pictures and muffled audio either. When it comes to video, you’ll want a spy pen that offers HD footage. You’ll be able to see notice every detail in the recording.

The same goes for audio recordings. Look for spy pens that come with high-quality microphones.

Because a spy pen utilizes a micro camera, the memory on it will be sparse. Knowing how much memory your sessions are going to require is vital. While you can easily start and stop recording with a push of a button on the pen, you can’t control how long it’s going to take for your target to confess to the thing you’re looking for.

Your pen might run out of space before you get there. If you’re someone who is running several cases on the same pen, then you could run into memory problems. A solution for this is to find a spy pen that either offers a lot of memory or can be backed-up with a computer.

Many spy cameras these days come with the ability to link to a PC. Some even allow you to livestream the content directly to the PC. With the use of that PC, you can backup all of the content that’s being fed through the spy camera. In this way, you can delete the recording on the camera and free it up for another session without worry.

One last aspect to consider is the size of the pen. If you want a pen that you can carry in your jacket pocket, then make sure it’s the right size and shape. 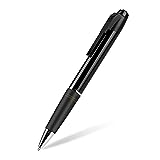 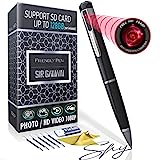